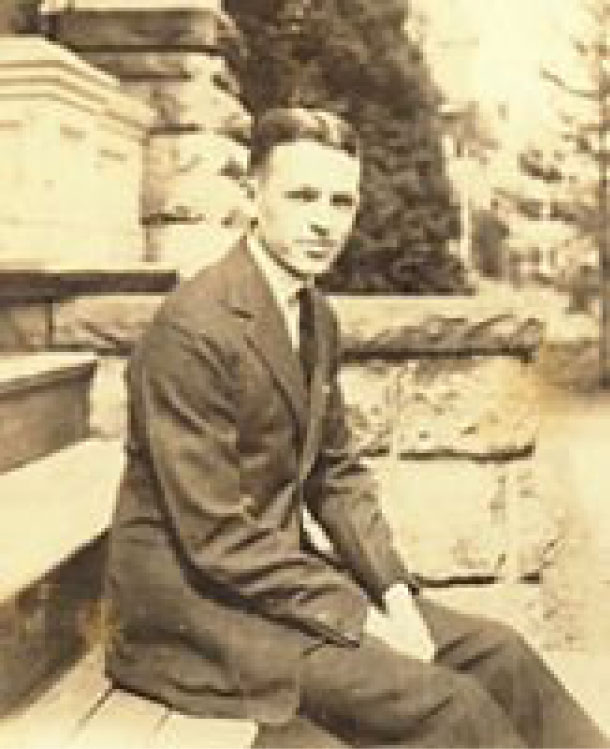 The Lauren Rogers Museum of Art is located of Fifth Avenue, a broad, tree-lined avenue, among turn-of-the-century homes one block from the center of Laurel. It is surrounded by live oaks, azaleas, English ivy, and Asiatic jasmine. The Georgian Revival structure with its formal axial symmetry was designed by Rathbone deBuys of New Orleans. It was erected in 1923 upon the foundations of Lauren Rogers’s house, which was incomplete at the time of his death. The building has double-hung sash windows in an exterior of local brick with Indiana limestone. The slender, attenuated metal columns were made by the Laurel Machine and Foundry Company.

The interior lobby, which was initially conceived as part of the library, features quarter-sawn golden oak paneling and cork floors. The ceiling design, suggest by Charles J. Watson of the Chicago interior decorating firm Watson and Walton, is the work of master craftsman Leon Hermant and uses intricate naturalistic motifs in plaster. Constellations encircle the chandelier, while the earth, moon, sun, and a star appear in the corners. The handwrought iron gates, railings, and hardware throughout the original building were created by Samuel Yellin, a master blacksmith from Philadelphia, Pennsylvania. In 1951, Lelia Rogers Hynson, the widow of Lauren Rogers, created the Browsing Room (now called the Reading Room), which was filled with furniture and a rug from the home of Lauren’s mother, Nina Eastman Rogers. The original art gallery was housed in the Reading Room, adjacent to the main lobby, where family memorabilia and portraits of Lauren Rogers and W.B. Rogers are now on display.

With the addition of a new wing in 1924, the museum gained five galleries, the most impressive being the American Gallery, which is 99.6 feet long. deBuys’s plans afford the visitor an uninterrupted view from the entrance through the lobby and hall to the end wall of the American Gallery, a total distance of 193.6 feet.

In 1983 another addition to the museum, designed by Michael Foil of Jackson, was completed. The new space provided needed support areas, such as offices, vault storage, and workrooms. Also included was a large gallery, which features a grand staircase of Tennessee black marble with brass railings.

The collections began in 1923 with a gift from Lauren Rogers’s great-aunt, Catherine Marshall Gardiner, who donated 494 rare North American Indian Baskets and artifacts. The Basket Collection has continued to grow and at the present time consists of 796 objects. Also in 1923, Lauren Chase Eastman gave the museum his collection of painting of the American West by H.W. Hansen (1854-1924) and his collection of medals that had belonged to the Rogers and Eastman families. Late in the same year Paul W. McClintook donated a large number of coins.

Early gifts to the library included a rare 1840 edition of Audubon’s Birds of America and a first edition of William Faulkner’s The Marble Faun. Other first edition works by Faulkner that were given in subsequent years included Soldiers’ Pay, Mosquitoes, These Thirteen, and Light in August. Judge Stone Deavours, a founding trustee, helped the library obtain rare volumes of Mississippiana, many of which are autographed by the authors. A large photograph collection documents the history of Laurel prior to 1926, and there are  early maps of the area. During the library’s first years of operation, generous donations of various materials were made, including information not available elsewhere in Mississippi. Today, the library serves the museum and its constituency as a resource for research in the fine arts.

During the 1920s there were other major additions to the museum collections. The Rogers and Eastman families donated important nineteenth- and twentieth-century paintings by Winslow Homer, Albert Beirstadt, George Inness, John Frederick Kensett, Ralph Albert Blakelock, and other noteworthy American artists. Works by John H. Twachtman and John Singer Sargent were acquired soon thereafter. Today the Lauren Rogers Museum of Art displays one of the finest collections of nineteenth- and twentieth-century paintings to be found in the South.

The decade of the 1920s also saw the donation by W.B. Rogers of 142 eighteenth- and nineteenth-century Japanese woodblock prints, including work by such masters as Harunobu, Masanobu, Utamaro, Eishi, Hokusai, and Hiroshige. This collection has been assembled by Mr. Rogers over a period of fifteen years with the encouragement of two friends, Dr. and Mrs. Joseph Hume of New Orleans, and the assistance of the dealer Frederick W. Gookin of Illinois. The museum acquired an additional twelve prints through a bequest from the Rogers family in the 1950s. Today this outstanding collection of Japanese prints attracts visitors from throughout the United States.

Lauren, as a young boy with his grandfather, Lauren Chase Eastman, circa 1910

In 1972 and 1973, Thomas Michael Gibbons and his wife, former museum trustee Harriet Stark Gibbons, co-owners of the local newspaper, the Laurel Leader-Call, donated their extensive collection of silver. The Gibbons Silver Collection includes sixty-five major objects, such as tea caddies, tea and coffee pots, baskets for cakes and sweetmeats, and salvers. Throughout its history, LRMA has continued to benefit from the generous gifts to the Collections by friends and patrons.

Building additions and renovations were completed in 1925, 1983, and 2013, bringing the Museum to its present size of 27,500 sq. feet, half of which is used as gallery space. A recent donation of Lauren Rogers’s childhood home and the surrounding property will be utilized in the future, allowing the Museum to expand its space for programs, exhibitions, administration and storage.

Today, more than 90 years after its founding, the Lauren Rogers Museum of Art continues as a memorial to a young man who stood at the threshold of his adult life, full of promise and high expectations. In the aftermath of his tragic death, his family determined to create a living monument to his spirit, his ability and the promise of his future. The Museum, they felt, would serve the community in ways that Lauren would have served it, had he lived. Their vision, generosity and commitment have endured in a Museum that opens its collections to the public six days a week, sponsors an extensive educational program and offers exhibitions that expose the members of the community to the best examples of art of its many forms.