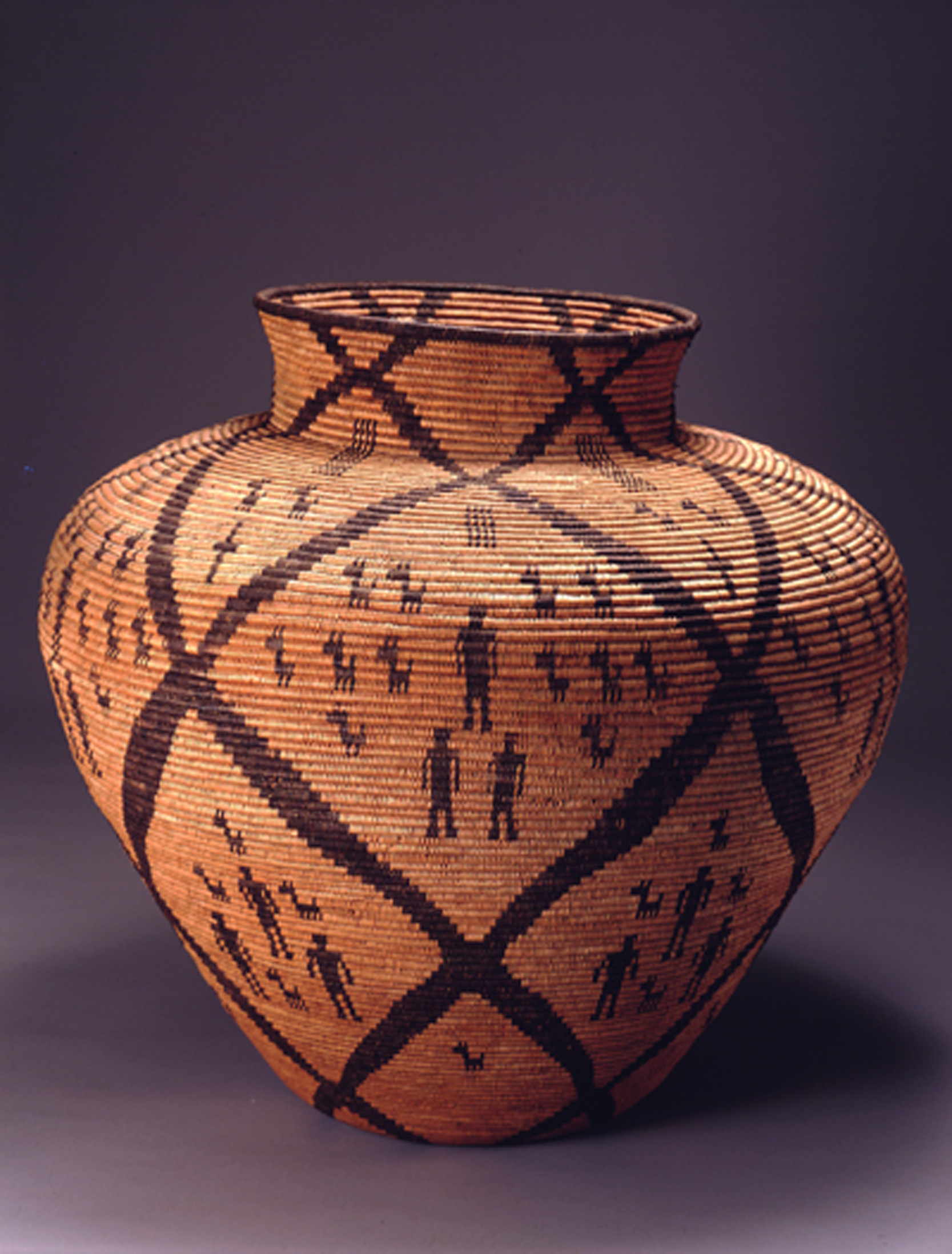 Around 1900, Catherine Marshall Gardiner of Laurel, Mississippi, read an article about Native American baskets and found herself tempted by the possibility of collecting them. Her husband, George Schuyler Gardiner, encouraged her to “go as far as she liked.” The Gardiners, the great-aunt and great-uncle of Lauren Rogers, moved to Laurel in the 1890s to establish a lumber company after the lumber business in their home state of Iowa had begun to slow. At first she planned to collect only contemporary baskets, but, she said, “the lure of old and fine work specimens soon gained the ascendancy.” When she embarked on this project, she little realized she would become one of the premier collectors of the period, often called “the golden age of basket collecting.” Mrs. Gardiner’s quest for fine specimens led her to contact and visit basket dealers, other collectors, officials and teachers on reservations, and weavers, eventually becoming part of a national network of other basket aficionados.

By 1923, when she donated her collection of almost 500 baskets to the Lauren Rogers Museum of Art, she had amassed one of the most representative collections of North American Native basketry in the Southeastern United States. Over ten years later, Mrs. Gardiner wrote, “It has been a work of great charm.” In the intervening decades, the Lauren Rogers Museum of Art has added to the collection, particularly with baskets from the Southeast, but Mrs. Gardiner ’s vision has remained the foundation of the collection.

Humans have been making baskets for thousands of years; it is a craft that is common to all cultures. Today’s Native American basket makers work within a tradition that is centuries old. For example, there are Choctaw weavers in Mississippi who are fifth generation basket weavers, following a tradition passed down from mother to daughter over many decades.

Although Native American basketry traditions suffered in the dislocations and epidemics of the 18th and 19th centuries, many tribes are reviving the old techniques and encouraging the development of weaving skills in the community. Most basketry traditions are closely tied to the land; baskets have historically been made with locally available fibers and dyes made of local plants. Tribal styles and techniques, though grounded in tradition, are open to interpretation by individual weavers. Weavers who move out of their traditional tribal regions often adapt old traditions to new materials, and contemporary artificial dyes are now widely used in addition to the labor-intensive natural dyes.

Basketry is an infinitely variable medium; baskets can be simple, unadorned utilitarian objects or objects of great complexity, made to be beautiful but not used. Yet even the most practical basket, well made, can be a thing of beauty wherein form follows function, centuries of tradition influence the weaver, and the materials reflect the land in which the artist is grounded. Basketry began as a utilitarian medium, developed to produce tools for cooking, storage, clothing and all aspects of domestic life. Almost all basket forms have their origin in the practical; the main forms are bowls, trays, jars, jugs, burden baskets and gathering baskets. Lined with pitch, a basket could be made waterproof and used to store water; some tribes used heavy baskets for cooking by dropping hot stones into a prepared soup or mush. Baskets are lightweight and flexible, making them convenient for nomadic tribes.

Gathering baskets often had long carrying straps instead of short handles to make berry gathering easier. Some of the most charming utilitarian baskets are those made to aid in parenting; baby baskets, rattles and tiny caps were all made using a variety of techniques and materials. Many of these utilitarian functions have since been replaced by mass-produced consumer items, but baskets have served — and continue to serve — other purposes as well. 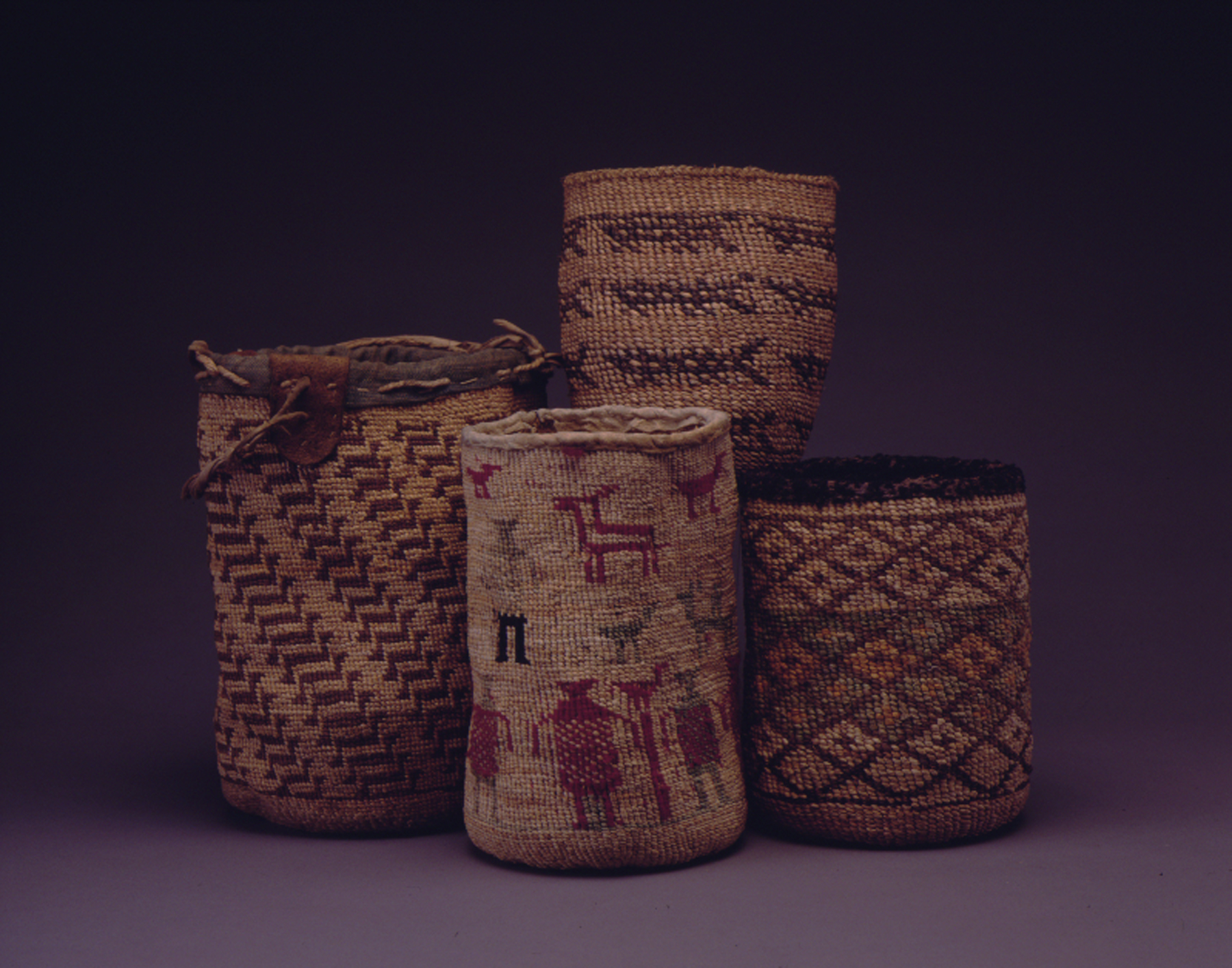 The “fancy basket” is the basket made for its beauty, not its function, though its materials, form and technique may be derived from a utilitarian tradition. Fancy baskets, often highly decorated, were made for trade or for gift giving. A fine example of a beautiful basket with a functional form (the saucer) but clearly not designed for daily use is a Pomo basket decorated with brilliantly colored feathers from four different birds. Many weavers responded to the increasing demand for trade baskets by producing miniature versions of utilitarian baskets; these could be made more quickly than the large versions, and a delicate, finely made miniature is often considered a true test of a weaver’s skills.

Basketry has also been used as a sculptural medium; woven effigies of humans and animals are found in many basketry traditions. Any or all of these kinds of baskets could have been adapted for sacred or ceremonial use. Baskets are used in dances, placed in graves, and used in other kinds of sacred ceremonies and rituals. Some baskets were made for the sole purpose of burning in a funeral ceremony. For the most part, the baskets in this exhibition were made specifically for everyday trade or use, and many have seen years of practical use for storage, cooking or food preparation.

A close look at the varieties of Native American basketry reveals the cultural history of the tribe of origin as well as the expression of a weaver ’s artistry; both are important parts of our nation’s history. Whether fancy or practical, tiny or oversized, every basket tells a story, has a purpose and is a work of art. More importantly, each basket comes from a pair of Native American hands, which created a woven treasure that would stand the test of time.