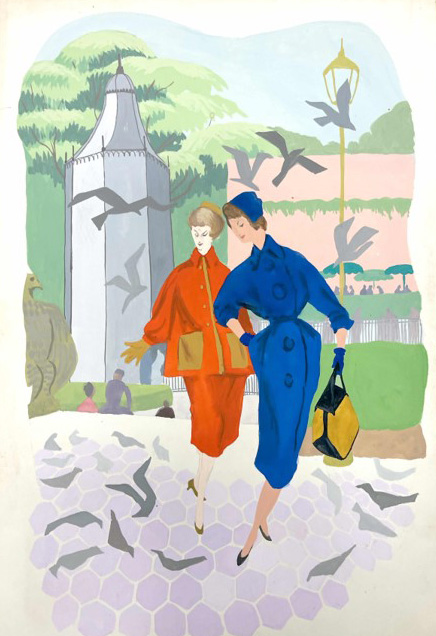 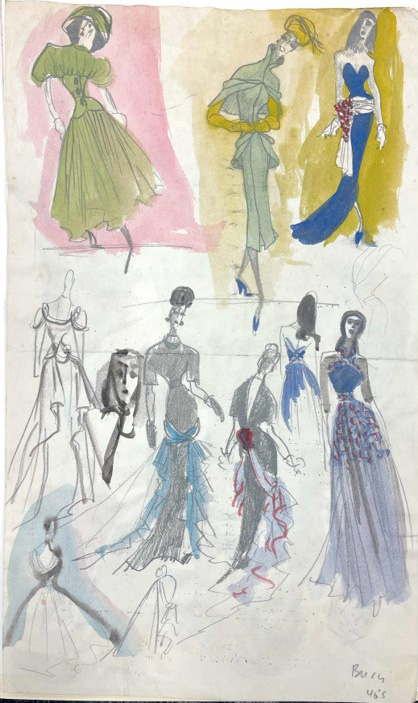 Although Andrew Bucci is known primarily as an abstract artist, he produced figurative works throughout his career. One aspect of his oeuvre that has not previously been explored is his interest in the fashion- and costume-clad human figure. Bucci’s education as an artist was varied, including studies with Marie Hull, as an architectural engineering student at Louisiana State University, and as an undergraduate and master’s student at the School of the Art Institute of Chicago (SAIC). Between those experiences, Bucci took part in classes at two institutions where he concentrated on depicting the human body in garments. Stationed as a military meteorologist outside of Paris after World War II, he took figure drawing classes at the Académie Julian, studying nude figures, but clearly reveling in rendering the smart suits and elegant dresses of clothed models, as well. In 1951, between his degrees at SAIC, he studied fashion illustration at the Parsons School of Design in New York City. It was obvious to his fellow students such as Rosemary Torre that he had come from a fine arts background, as his drawings from the model, his class projects, and his costume design drawings were unusual. Torre believes that if he had stayed at Parsons he would have become a fashion designer. His time there was brief, and he returned to SAIC to get his master of fine arts degree. However, his continuing love of fashion can be seen in colorful drawings produced in the 1960s that show inventive garment silhouettes combined with his signature bright colors and expressive lines.

Andrew Bucci: Fashion Forward will feature his sketches made at the Académie Julian, class projects and notebooks from his study at Parsons, and vibrant figurative drawings from the 1960s.  The Lauren Rogers Museum of Art has held two single-artist shows of Andrew Bucci’s work, the first in 1952 and Expressions in Color: An Andrew Bucci Retrospective in 2000.The Museum is pleased to present this exhibition as part of the artist’s centennial celebration.