Exhibition | The Power of Color 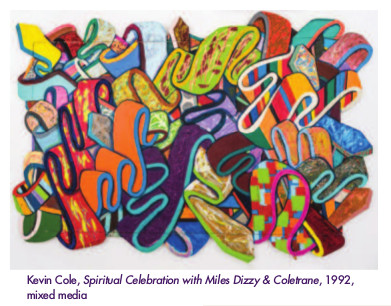 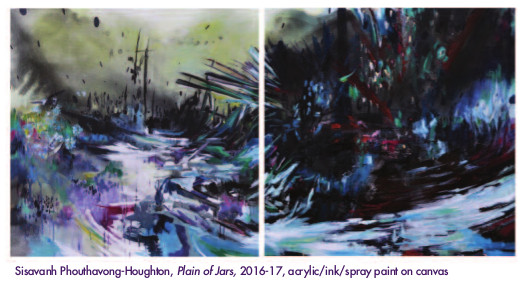 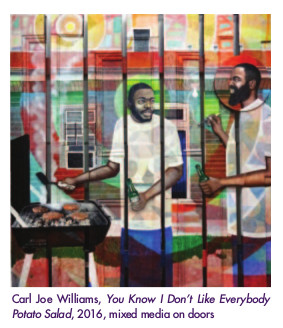 The Power of Color

This exhibition highlights the work of three contemporary artists working in the Southeast. Keven Cole, Sisavanh Phouthavong-Houghton, and Carl Joe Williams. Kevin Cole is one of the most renowned mid-career artists in Atlanta, Georgia. His vibrant acrylics applied to twisting and curling canvases show the relationship between color and music, especially music as it relates to the African-American community. Tennessee artist Sisavanh Phouthavong-Houghton is one of the first professional Lao-American visual artists and educators of her generation. Through the rhythmic fragmentations and strong color contrasts in her powerful acrylic work, she explores the process of connecting and disconnecting with a place or community as an immigrant. Carl Joe Williams grabs abandoned televisions and other materials from the streets of his New Orleans neighborhood and then paints complex color combinations directly on the surfaces of these found forms. He also appropriates visual media and music clips to play on the television sets to address the physiological and historical concerns of everyday people.

Art professor and mixed media artist Kevin E. Cole was born in Pine Bluff, Arkansas in 1960. He received a bachelor of science degree in art education from the University of Arkansas at Pine Bluff in 1982; his master of arts degree in art education a year later, and his master of fine arts degree in drawing from Northern Illinois University in 1984. Cole began his career as an art teacher at Camp Creek Middle School in College Park, Georgia in 1985. At the same time, he became an adjunct professor at Georgia State University’s School of Art and Design where he remained until 1998. In 1990, Cole was chairperson of the visual and performing arts magnet program of Tri-Cities High School in East Point, Georgia until 1994. In 2003, he became the chairman of the Fine Arts Department at Westlake High School where he created the school’s first arts program. He has been featured in Who’s Who in Education and received the Award of Excellence for Public Art by the Atlanta urban Design Commission. In 1994, Cole was commissioned by the Coca-Cola Company to create a 15-story mural celebrating the 1996 Olympic Games in Atlanta, Georgia. The mural took two years to create and measures more than 800 square feet. Soul Ties That Matter, a 55-foot long installation, was recently installed in the Hartsfield-Jackson International Atlanta Airport.

Sisavanh Phouthavong-Houghton was born in Vientiane, Laos in 1976 and at the age of four, her family emigrated from Nong Khai refugee camp in Thailand to Winfield, KS. She earned a bachelor of fine arts (painting) from the University of Kansas and a master of fine arts (painting/drawing) from Southern Illinois University-Carbondale, IL. She is currently an associate professor at Middle Tennessee State University in Murfreesboro, TN, where she teaches advanced level painting courses. In 2014, she won an MTSU Outstanding Teacher of the Year Award. Her work has been seen in national and international solo, juried, and invitation exhibitions throughout the United States, Surinam, Belgium, France, Canada, and New Zealand. Most recently, Arts at the Embassy selected her collaborative artwork with Jarrod Houghton for a permanent collection at Paramaribo, Surinam. Phouthavong-Houghton has been published in Studio Visit magazine and has been recognized as a New Superstar of Southern Art by Oxford American. Her research has been funded several times by the Tennessee Arts Commission and MTSU grants. She has partnered with the First Center for the Visual Arts’ Educator for Community Engagement; the Oasis Center; and the Center for Refugees and Immigrants of Tennessee.

Carl Joe Williams, born in 1970 in New Orleans, Louisianna, is an American visual artist based in his hometown. Williams attended the New Orleans Center for Creative Art (NOCCA) where he received formal training. Williams continued his studies at Atlanta College of Art earning his bachelor of fine arts degree. Williams is on of the founders of Blights Out, a Creative Capital-supported project in New Orleans along with artists Lisa Sigal and Imani Jacqueline Brown. Blights Out is a community–and artist–led initiative to activate agency in neighborhood development. This initiative began as part of Prospect New Orleans, the largest biennial of international contemporary art in the U.S. Williams has had a variety of exhibitions including at the George Ohr-)’Keef Museum of Art in Biloxi, Mississippi; Crystan Bridges, in Bentonville, Arkansas; New Orleans Museum of Art; and Hammonds House Galleries, Atlanta, Georgia, among others. In 2013, he as a recipient of the Joan Mitchell Center NOLA Studio Artist Residence Program. His work is included in the Crystal Bridges collection.